Now we are preparing for producing "SIGGRAPH Archive 2009".

SIGGRAPH Archive 2009 is a 3D image archive of past SIGGRAPH and SIGGRAPH Asia, oriented on Second Life, Picasa, and Flicker. It can be exhibited with Wii Remote or Keyboard + Mouse. Previous version of this archive were exhibited in SIGGRAPH Asia 2008 (Singapore) and Laval Virtual 2009 (Laval, France).

SIGGRAPH Archive 2009 is the latest version of interactive 3D image archive of past SIGGRAPH and SIGGRAPH Asia. And also, this is a new platform that ties exhibitor + exhibition space + visitor.

All photographs are collected from past chairmans of SIGGRAPH and SIGGRAPHAsia, participants and guests of SIGGRAPH, and people on the web.

Past photographs can be queried by the time and keyword. Author's original design method "Contents Oriented Space" - Space design technique that is appropriate for body sensation of virtual world that is not imitation of real world - is used for space planning, thus, the user can browse past photographs immersively by selecting and clicking next to next photographs in the air.

SIGGRAPH Archive 2009 can be enjoyed more easily by using a projector and a Wii-remote. An immersive browsing is possible with controlling full-scale avatar by the entire body of user. In the use of projector + Wii Remote in Laval Virtual 2009 exhibition, it was so popular among children.

The photograph of this SIGGRAPH ASIA 2009 can also be archived in (half) real time. When the visitor up-loads the photograph to photo-sharing service, it will be reflected in the archive in Second Life later.

It will be continuously updated after next year.

This is a mashup project of virtual world (Second Life) and photo-sharing service (Picasa and Flickr). This archive can be accessed through the Internet at the same time as accessing it in the exhibit space.

The author is using Second Life, Flickr, and Picasa those are the best platform in 2009. But, new platform will be able to be selected according to the age in the future. 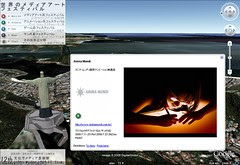 Moreover, as an additional function, photographs with geotag can be mapped on Google Earth, like "Media arts festival mapping" @ Japan Media arts Festival 2008.

Posted by HIdenori Watanave at 19:07 No comments: