Project Trailer#2 (Dec. 1, 2007) - Presentation in DAF Tokyo
'Archidemo' is the experimental demonstration for enhancing of the possibility of the architecture and environmental design in the 3DInternet (3Di) space. All the activities of our team were done on NikkeiBP and NikkeiBP way SIM (Simulator) of Second Life from Aug.01.2007 to Jan.09.2008. In addition, 'Archidemo' was Pre-event of "Digital design competition 2007" (Nikkei Architecture sponsoring).

Winners of Digital Design Competition
To expand the possibility ofnot only 'Imitation of the Physical world' but also 'New conceptof architecture in the 3Di-space', various demonstrations and the field crossing collaboration were developed by a lot of artists and researchers.

For example, trial of In-world (=in the 3Di-space)photograph exhibition by photographer and the 3Di-spacearchitect,media-artistic installation, scientific visualization, trialof realization of world of Sci-Fi novel, Automatic conversationspace of chatterbot, Architectural workshop by students, and so on. 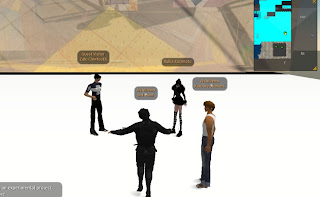 For the period of five months, various collaboration works were developed in 'Archidemo'. Over 50 members participated in this activity, for example, University researchers and students, Artist,Photographer, Sci-Fi novelist, Cognitive Scientist, VR engineer,etc.

The activity of them in the virtual world was almost the first time though they already had the activity results in the physical world. 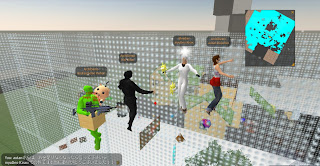 They discussed and generated a lot of collaboration works with the other participants in the 3Di-space. There were participants not met in the real world either from first to last of this activity.

There were unpredictable collaboration works in the real world. For example, 'Architect and Sci-Fi novelist', 'Architect and Cognitive scientist', and 'simultaneous architectural-act by
student from different actual cities', etc. These activities were possible in 3Di space where the restriction of time and the distance did not exist. 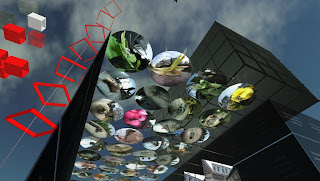 "Tokyo Konchu Digiwide" insect's view, Kimio Itozaki + Hidenori Watanave
In 'Archidemo', New method of spatial designing that differed from reproduction of the architecture and the city of real-space was searched for.

To do a comfortable, efficient fieldwork in the 3Di-space, the following points are requested - 'Contents of the space' can be recognized visually and can be accessed directly from the outside
of space. In this case, 'wall and ceiling' that obstructs the view and restrains the action is essentially unnecessary in the 3Di-space. 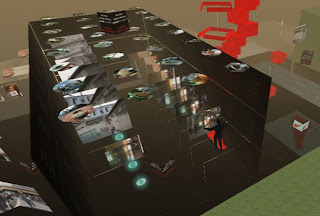 "Nihon Mitsubachi" "Yomogi Edasyaku" Kimio Itozaki + Hidenori Watanave
In 'Archidemo', Invisibility navigations by LSL (Linden Script Language) programming composed architecture and environment instead of wall and ceiling. People could do flying, walking, and teleporting and 'landing on the contents'. This operation feeling was similar to the contents inspection in the 2D web space.

This concept was named 'Contents oriented space'. It was used for our spatial designing in 'Archidemo', and moreover, it became a feature equipped also in spatial designing having been
constructed by the member who did not have the advance knowledge. This concept can be effective also to other general 3Di space.

4. Translating the real-space into the 3Di space 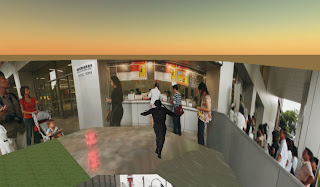 "Tokyo Tower" Hidenori Watanave + Tomoyuki Sakaguchi
There were a lot of architectural experiments that used photograph and movie of a the real-space as a 'material' of the spatial designing in'Archidemo'.

'Wall and ceiling' is unnecessary in Architecture in the 3Di-space, as being described in the preceding chapter. In a word, It is not effective reproduction that even if the construction of the real world is reproduced by Realistic 3-D modeling. 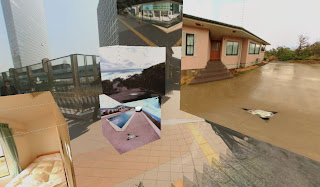 "Costa del Numero" Hirotaka Tobi + Hidenori Watanave + Jiron Koyama
As an alternative idea, we established a very effective method - composing the space with 'Navigation' by using 'Material (photograph and movie)' from the real-space. This is an application of 'Contents Oriented Space', In other words, 'The program tied the photograph and movie'.

Examples of Contents oriented space
This is a method of reproducing not 'Shape' but 'Experience' of the real-space. It can be paraphrase of 'Translating the real-space into the 3Di-space'.

The method of spatial designing of the 3Di-space was established through the activity of 'Archidemo'. And the experiment of 'Translating 3Di space into the real-space' by using the GIS is progressing now, as similar as that had developed in NetAIBO project.

'Archidemo' was selected to be part of FILE 2008 (the 9th edition of FILE - Electronic Language International Festival in Sao Paulo, in Media Art category, held in Aug.4-31, 2008.) and SIGGRAPH2008 (in Los Angels, Aug. 11-15, 2008). The theme of the exhibition will be a visualization of a huge visual archive of FILE and SIGGRAPH in the 3Di Space. Architectural works that has already been completed in 'Architecture in The 3Di-space' will be used as a prototype.

This project started based on Second Life, because which is the best virtual-world service available in the present market. But, This is also a concept which can extend to the general Metaverses.

From now on, we want to extend our concept toward an infinite possibility of the human interface between the real-space and the virtual-space, and make both worlds more close to each other.

Moreover, this project offers to extend the power of web3D in familiar way with its contents creators. There is a market where the tools and the creators have already existed enough, so the future is beside you.

Posted by HIdenori Watanave at 10:36 No comments: